A starter plate that rocks your socks

I was out last night to dine with a friend and showed her my favourite Flammkuchen place. I'´d been there with other friends a while ago and we just ate Flammkuchen. 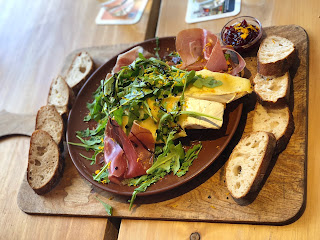 This time we wanted a starter for 2 to get the evening going at Flambé Restaurant. The choice of starters is limited to 3, but even that small choice needed some time to think about it.
We decided on melted Camembert over orange slices with rocket salad and Serrano ham and cranberry sauce.

WOW  That was a tasty starter that was brought to the table. 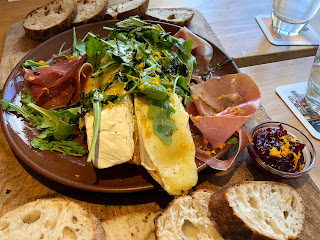 The orange slices were just a little warm and the cheese was running a bit over the top.
Rocket salad is usually not my kind of salad, but in this case it went great with the warm cheese and kept its structure. Balsamic cream and the Serrano ham are a wonderful addition to the plate.
A small cup with cranberry sauce and a bit orange peel on top is the topping of the Camembert.

Later we had two wooden boards with Flammkuchen. 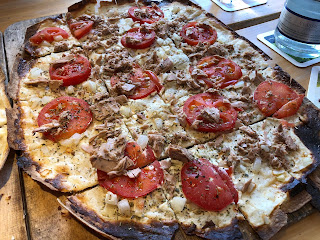 One with tuna and tomatoes on sour cream 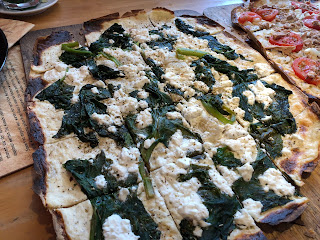 One with spinach and French sheep milk cheese and oregano on sour cream.

They were  both very good.

I had a hot peppermint leaves tea with honey, we just topped that with a large bottle of sparkling water. The downsides of driving. 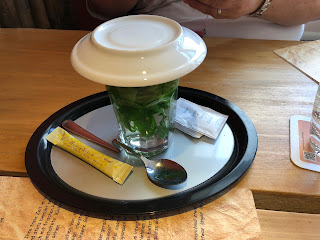 Email ThisBlogThis!Share to TwitterShare to FacebookShare to Pinterest
Labels: A starter plate that rocks your socks