I have this Issy whip bottle and cartoushes for a while. Until now all my efforts to produce some kind of espuma went down the bin. Either the batter inside was too thick and did not come out or it was too thin and I had no foam. My aim was to master this thing one day. My friend had the same problems and she was looking forward to beat the beast this time. 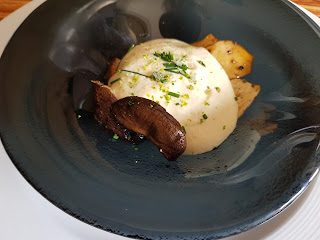 2 weeks ago at German television there was a sequence of KnifeFightClub, a late night one hour cooking show. 2 chefs, often Michelin star crowned, have 60 minutes to produce 3 dishes with 3 ingredients that they did not know before the show. These ingredients get unveiled just before the cooking starts and they are often gross or rare. The chef with the best results wins the large cooking knife, the other gets a small paring knife.

One of the mysterious ingrients here was Pom Pom Mushroom. A huge white kind of round fuzzy mushrooms.
One of the chefs made a scrambled egg espuma and served it on top of this mushroom. 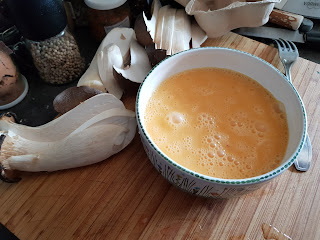 No way to get that kind of mushroom here. But a decent king oyster mushroom is no problem to get. The challenge for me was the espuma.

And we did it! We mastered the beast!

In a wide pot heat up the double cream with a bit of salt and let it reduce until you have less then 200 ml. Take care  not to boil it over.
Beat the eggs together in a bowl and pour them into the pan with the hot oil. On medium to high heat scamble the eggs until they are very dry, put them into a bowl to prevent to get a crust. 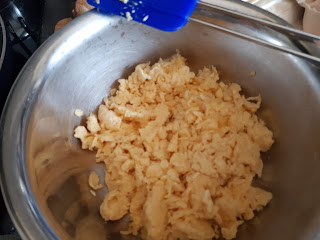 Use a very strong blender or Thermomix. Make a very fine cream.
Heat up the butter in the cleaned pan and let it get brown, slice the mushrooms lengthwise and brown and season them.
Use the funnel with the fine sieve of the Issy to get the egg mix through, close the lid and place a small nozzle on.
Get 3 cartoushes in  and shake well.
Place the mushrooms in 4 bowls and turn the Issy whip head down.   Cross your fingers.
Give it a good push and hope for a Espuma.
Finish with some chives.